Find a Therapist in Ohio

Welcome to the Ohio therapist directory at GoodTherapy.org. Our directory is the fastest and safest way to find a good counselor or therapist in Ohio cities. We only include professional therapists, counselors, and psychologists whose work accords, in attitude and orientation, to the elements of good therapy. Find a therapist or counselor in your Ohio zip code, or click on the links below to see the counselors in your city. If you are looking for telehealth therapy you can click here to see all Ohio telehealth therapists.

About 74,900 residents worked social service, health care, and community assistance jobs in 2015. Jobs within this group included working as a psychiatrist, child psychologist, parole officer, counselor at a residential treatment center, counselor at a drug and alcohol rehab center, community health worker, health educator, guidance counselor, therapist at a depression treatment center, clinical social worker, or a marriage and family therapist. In Ohio, residents employed in these and other related occupations earned a mean annual wage of $43,950. 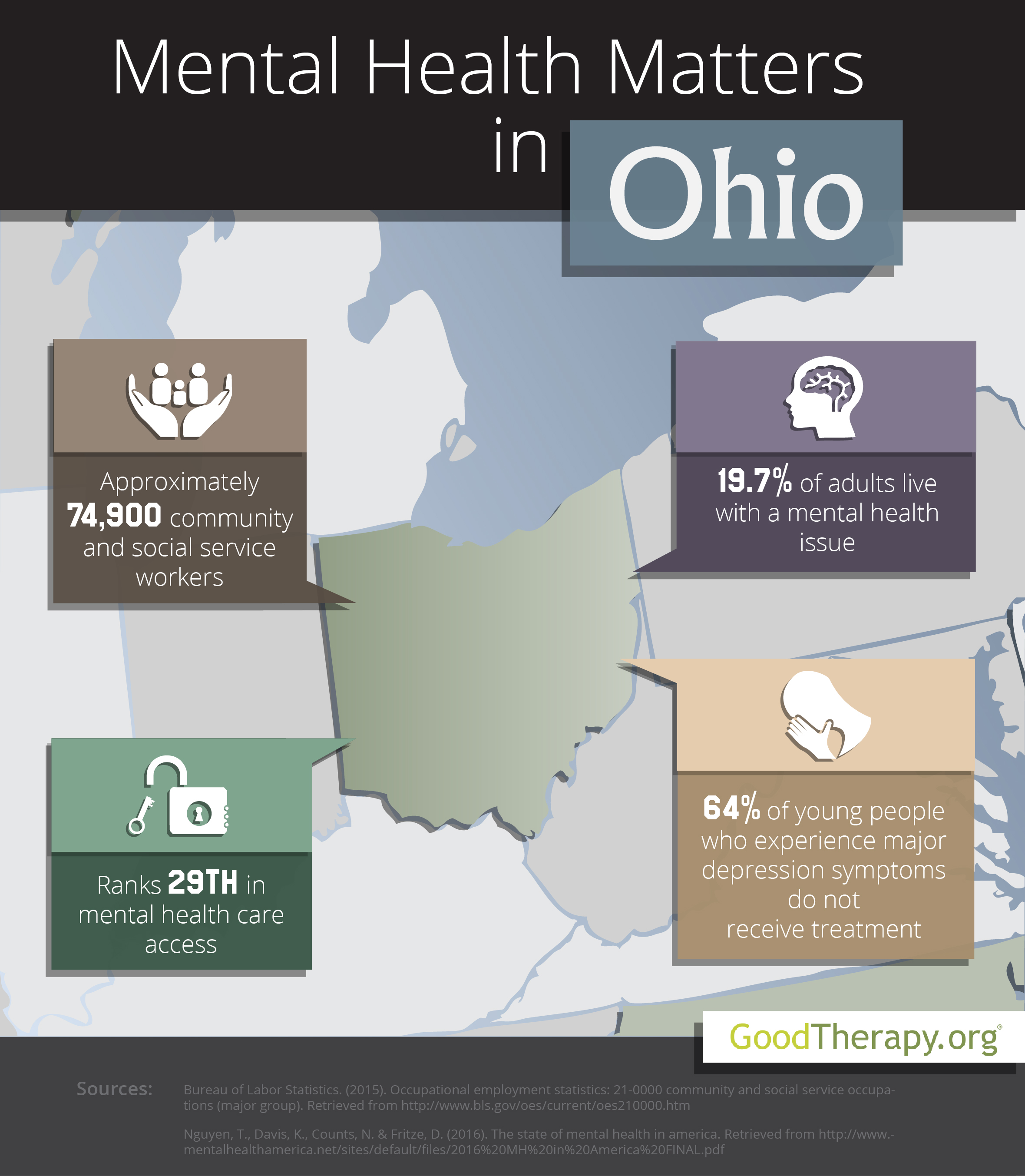 The 2016 MHA survey reports 19.7% of residents older than 18 are experiencing mental health issues. This percentage is equivalent to roughly 1.7 million people. Data from the Substance Abuse and Mental Health Services Administration (SAMHSA) states 7.7% of adults age 21 or older engaged in heavy alcohol use in Ohio between 2009 and 2013. This figure is higher than the national average of 6.8% over the same period of time. According to the 2016 MHA survey, Ohio was 23rd for adult dependence or misuse of alcohol or illicit drugs, with 8.7% of the adult population affected. The survey also claims 344,000 adults in the state experience serious thoughts of suicide. In 2016, roughly 301,000 adult residents with mental health issues have no insurance. Approximately 329,000 residents who tried to find a therapist in Ohio experienced socioeconomic barriers to treatment.

Depression among younger residents is a major concern for some child psychologists in Ohio. Mental Health America reports 59,000 young people in the state are currently experiencing severe major depressive episodes. Of this population, only 10,000 children receive consistent depression treatment. At present, the state is ranked 39th in mental health workforce availability—with 716 residents to each mental health provider in the state.